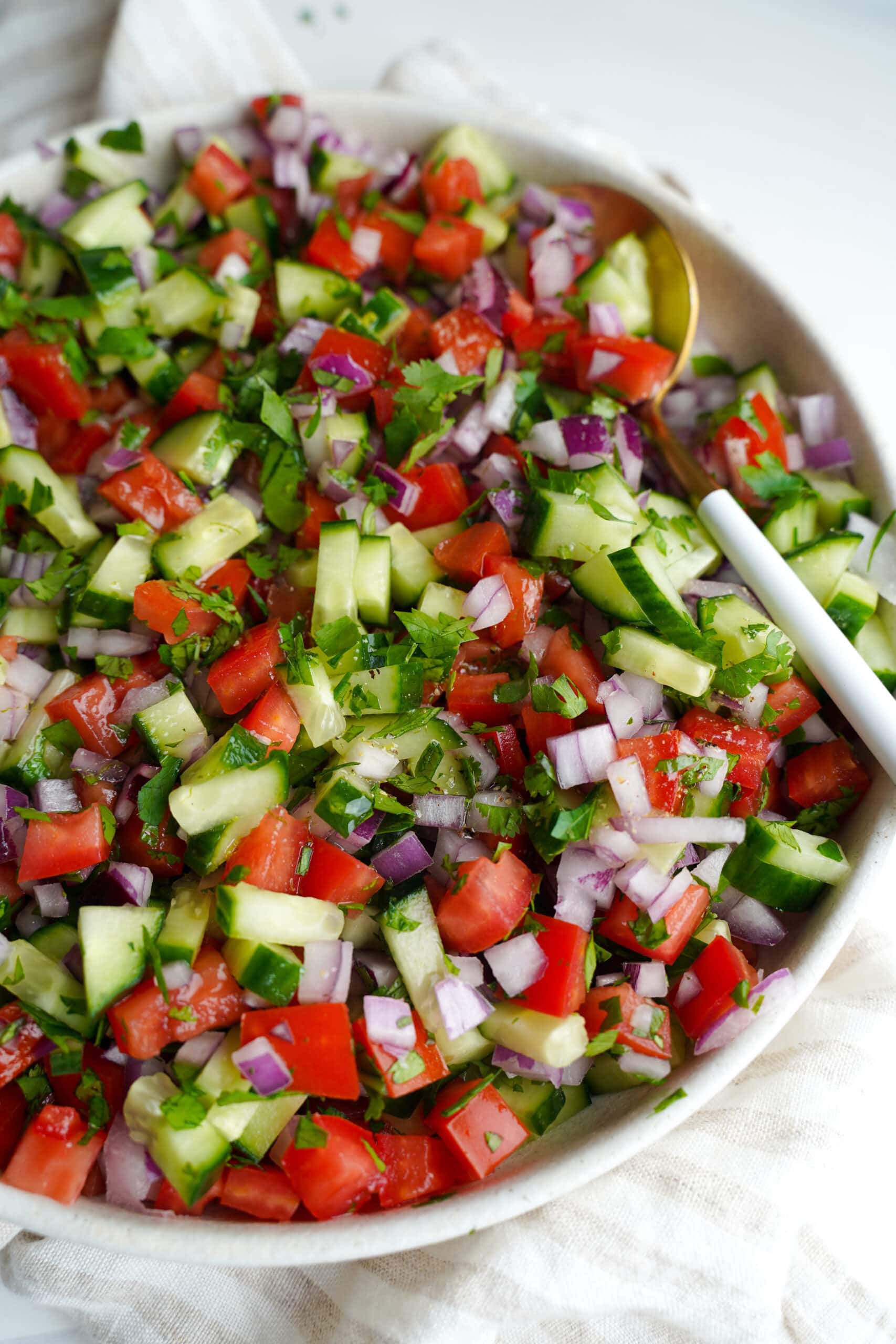 I’m so excited to share another Persian recipe with you guys because whenever there’s food involved, it’s always a good idea to go back to your heritage, am I right?

With that said, I love trying new things and tasting food from different cuisines. What is your favorite dish from your culture or heritage? Let me know by commenting on this blog post – I’d love to know!

Shirazi salad or Salad-e Shirazi is a vibrant, colorful salad that is commonly served in any Iranian household, including my own. It is known for this really uniform look since everything is cut to about the same size. It makes a seriously good companion and balances out the richness of meaty dishes like lamb or chicken kabobs.

During our weekend family barbecues, my Dad would grill his signature saffron joojeh kabobs (learn how he makes it here) while this tomato cucumber salad was always the side dish. I guess you could say I’ve been eating this salad recipe since I was a kid.

You’re going to love how nutritious yet flavorful this Shirazi salad is. It’s made with fresh, crunchy vegetables like cucumbers, onions, and tomatoes. The addition of mint and fresh herbs makes the salad super fragrant and refreshing. Finally, the dressing of lime and olive oil gives it that zing and that oomph!

Shirazi salad dates far, far earlier than my family’s barbecue dinners. The recipe has been around since the end of the 19th century. It originates from Iran and its name is derived from a southern city in Iran called Shiraz. Yes, that’s where Shiraz wine comes from, too.

At first glance, this tomato cucumber salad may look a lot like Greek salad, and you’re absolutely right to think they are similar. The ingredients, the dressing, and the simplicity of it all do ring true to the flavors of Middle Eastern cuisine.

So, what’s the difference between Greek salad and Salad-e Shirazi? Well, we can think of them as cousins. Shirazi salad is more acidic and more aromatic than Greek salad. Greek salad has strong, briny flavors coming from the olives and feta cheese, which are absent from Shirazi. Regardless of their differences, though, they’re both yummy in their own ways.

Here are the ingredients for this Persian salad, just like Dad would make it:

For the salad, you will need:

Step One: Remove the seeds from the roma tomatoes. Dice the tomatoes, cucumbers, and red onions into small cubes of the same size (See photos for size estimation).

Step Two: Combine the above ingredients with parsley and cilantro in a medium bowl.

Step Three: In a small bowl, whisk together the lime juice, lime zest, salt, pepper, and olive oil. Drizzle the salad with the dressing and toss gently to coat. Serve immediately. 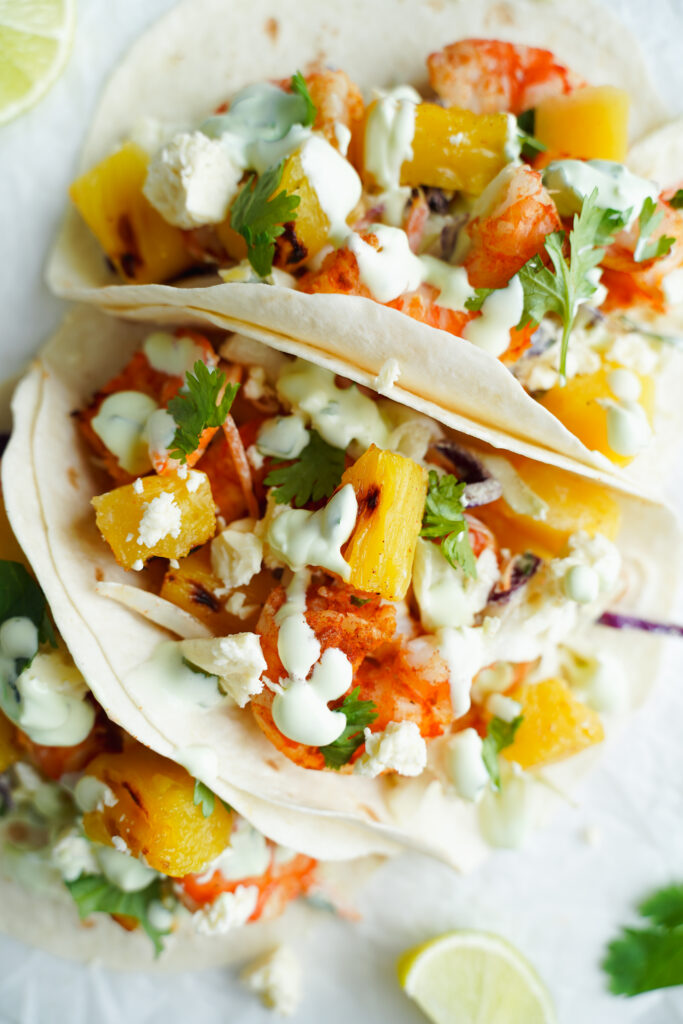 Taco Tuesday meets Surf-n-Turf with this recipe, and oh, are you going to love this one. Imagine a warm, softshell tortilla filled with juicy shrimp that’s been baked in a hot cumin-chili-garlicky marinade. Accompanying the shrimps are sweet pineapple chunks, crunchy shallots, and creamy cilantro coleslaw.  Flavor, texture, and nutrition – this recipe truly has it all. Also, depending on the type of tortilla wrap you use, these shrimp tacos can be gluten-free. It’s also a keto-friendly recipe and can be made low-carb by skipping the tortilla wrap and serving the shrimps over a bowl... 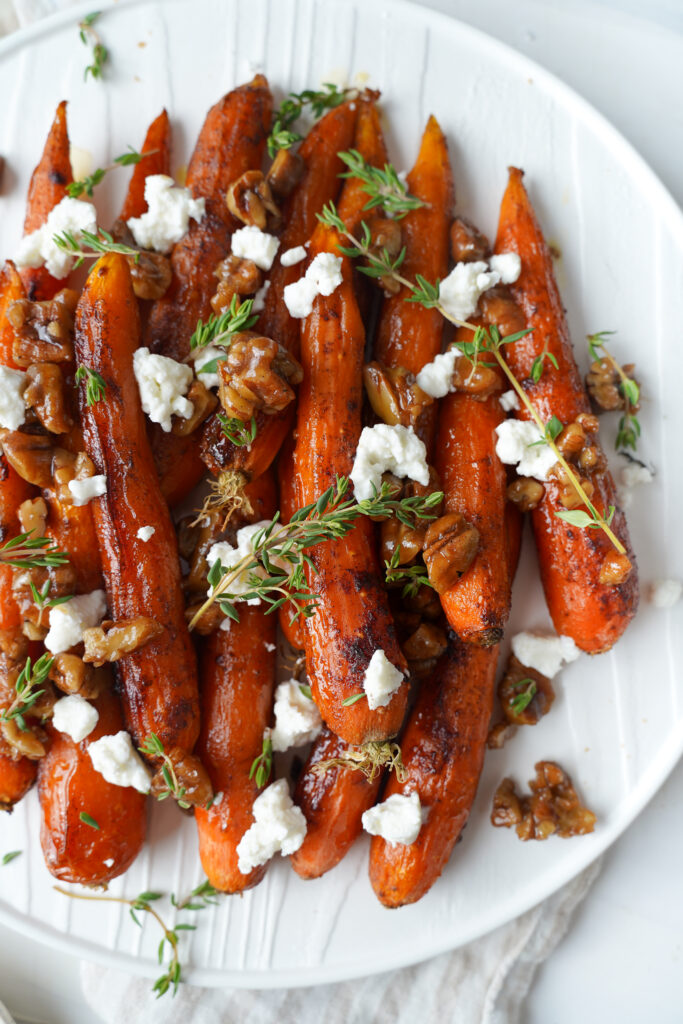 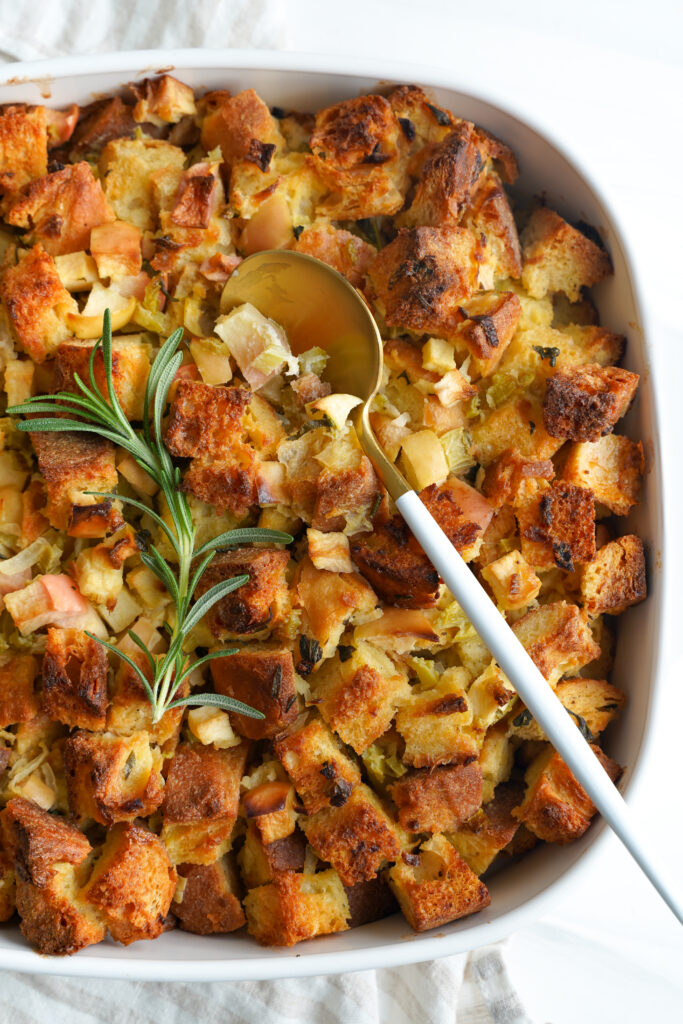 Unless you live in a camper van traveling cross-country this Thanksgiving, you have no excuse for buying stuffing in boxes anymore. Nope. Not this year, folks. Why?  Because after you discover how easy it is to put together a delicious, warm stuffing, you’ll never go back to the boxed kind. Yes, prepackaged stuffing tastes fine and is an absolute breeze to cook, but there is no comparison once you try making this homemade version.  With home-cooked food, you are always in control and get to choose the ingredients that go into your food. (I’ve even stopped eating mac and cheese... 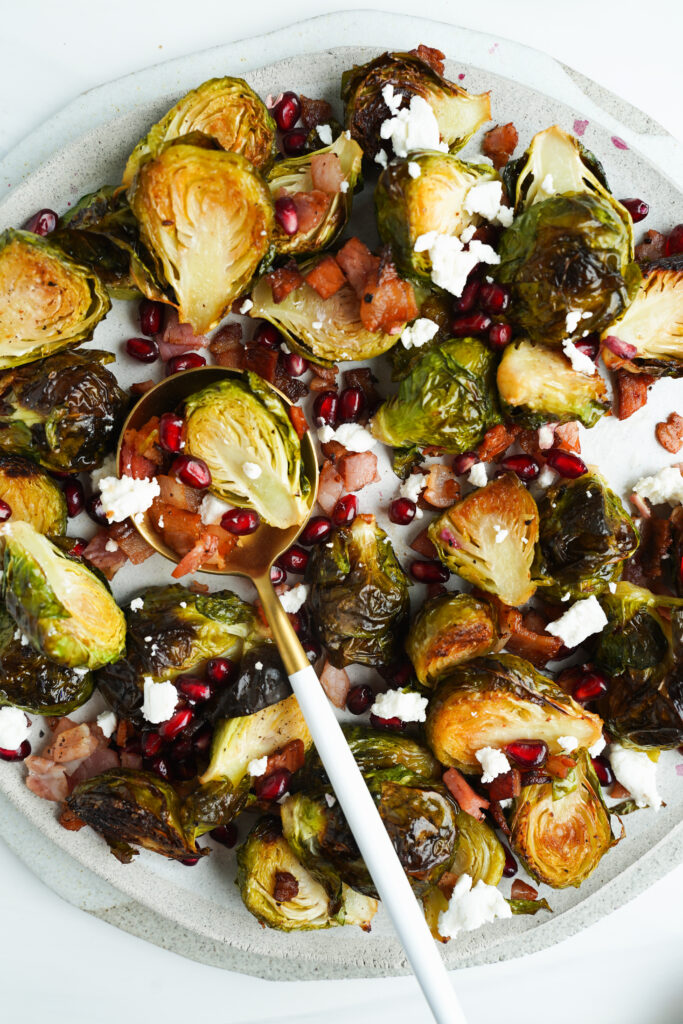 I remember growing up, I was a big desserts and candied yams girl at my holiday dinners. I always remember the one Christmas where my jaw dropped when I had oven-roasted Brussels sprouts for the first time. It was crazy good. I couldn’t believe that vegetables could be this delicious.  In my take on this holiday classic, I have added crispy roasted bacon and its fats that make everything better, too.  Now this recipe is one way to enjoy vegetables, and I mean REALLY enjoy them… not just tolerate them to meet our daily fiber intake. Even the pickiest eaters and vegetable haters will be... 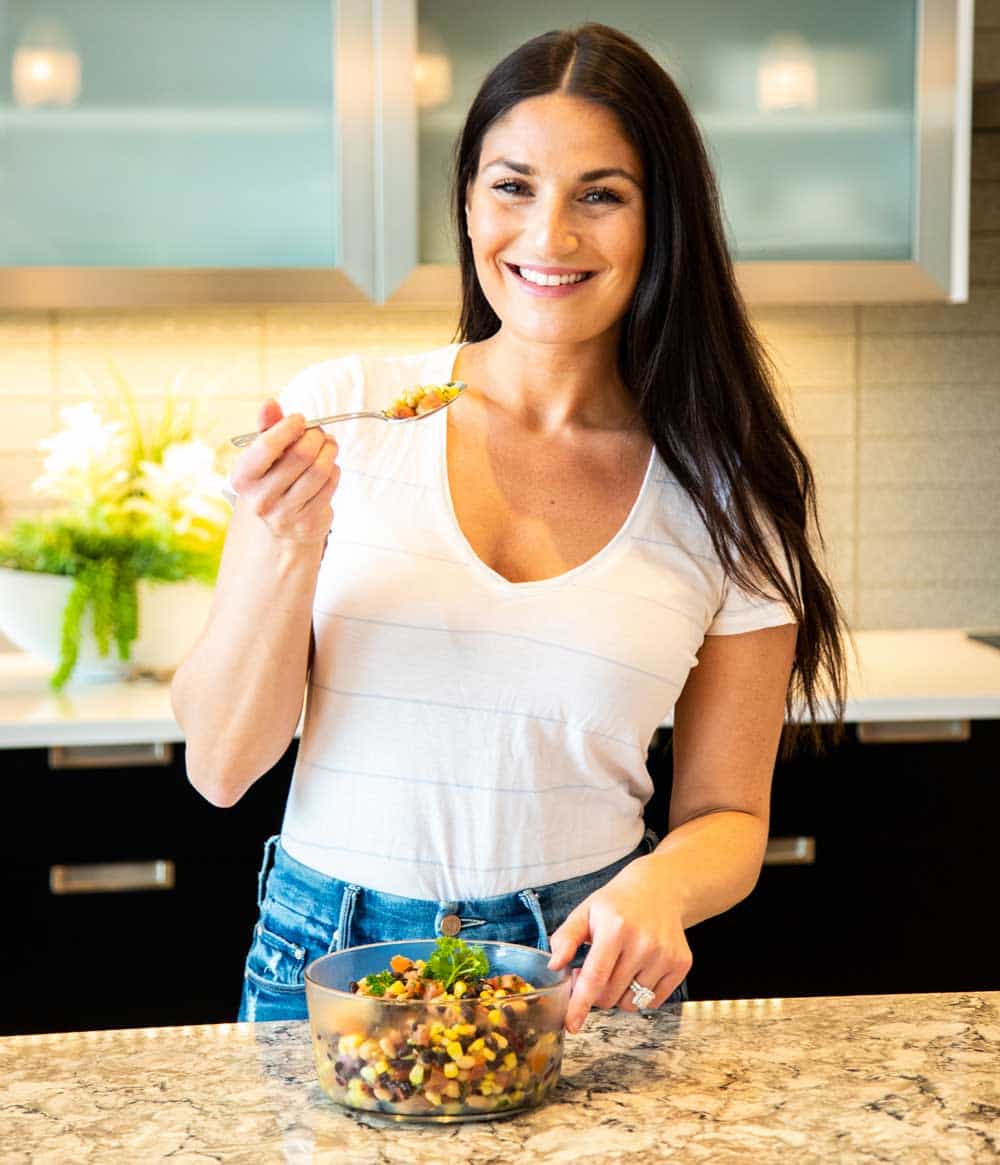